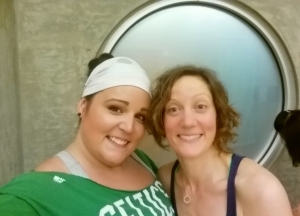 Clairebear & I post ZUMBA fitness with our rosey cheeks, before we were booted from the studio for a Yoga class

Yesterday was an up and down thrill ride that I made into my b*tch!

I arrived at work to find cookies, Lemon Raspberry Trifle, wine, a chocolate stash in my drawer (from the week before) and Tootsie Pop suckers. Honestly! I am not going to lie, I hovered around the cookies, I had a bit of a staring contest with the trifle. The thought of “One cookie/one piece of chocolate/one scoop of trifle…won’t hurt.” “I can have a little taste”. That was when the warning bells went off in my brain and I was happy! First, I heard the warning bells! Second, “one” has never proven very effective for me. There is plenty of research out there that supports the addiction to sugar is as equally as bad as an addiction to heroin or cocaine. So I am determined to kick the addiction! Even when I got off the train last night, waiting for the bus, I saw the little corner store and thought “Mmmm wine gums.” I found it interesting how quickly your brain processes. I left the line, walked across the street, pulled a walking U-turn and returned to the line up. The man I was previously standing in front of invited me back to my spot, smiled and said “I should have down that” and held up his A&W bag. I smiled and said “Throw it out. If you really don’t want it, throw it out. Would the sting of throwing that money away help?” He gave me the most perplexed look, walked over to the garbage can and tossed it all in. He was quit a fit man, clearly has spent some time in the gym and I found myself realizing, fit or fat, we all have battles. Yesterday, I won my battle, despite the “food bumps” thrown in my path.

My exercise came in the form of ZUMBA yesterday with 2 of my favoritest people in the world! My friend Sabrina and I have been taking classes for a couple weeks now, mostly we laugh and joke about how “white girls can’t dance,” but we sweat our behinds off and have a good laugh and last night my dearest friend Clairebear joined us. Yes, that is officially her name as decided by me. I haven’t seen her in over a year and a half since she decided to travel the world with her beau. Exercise really is so much more fun when you get to laugh, bootie shake and sweat with friends. My steps just passed 17,000. I missed my water intake my 10oz! Here is how I know I need to drink more water….I drank all that water yesterday and I went to the bathroom the same amount as if I hadn’t. 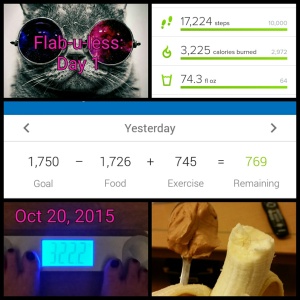 going to write about and that is when I knew that there was something I needed to do first….

I haven’t stepped on the scale since the final day of my successful Sexy In My Skivvies 30 day challenge. In my head I had put on AT LEAST 10lbs. I needed to step on the scale and own the number that showed up. Not be afraid of it, or scared, or worried. Own it so I know where I am starting from. I probably climbed on and off that sucker 6 times because I was in COMPLETE disbelief about the number. I have only put on .8lbs since my last weigh in. NOT EVEN A FULL POUND. I briefly went down the path of my scale is a big fat liar, but quickly realized it is always worse in our heads than reality. I feel more motivated and even more determined for this challenge.